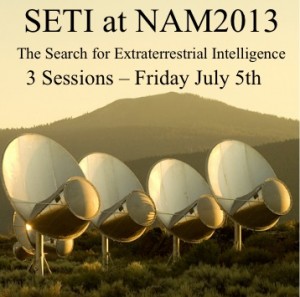 “Why is the FHI interested in looking for aliens? Isn’t it the Future of Humanity Institute?”

On July 5, Dr. Sandberg participated in the first meeting of the UK SETI Research Network, an association of UK scientists devoted to looking for extra-terrestrial intelligence. Anders’ thoughts:

“The meeting got plenty of media coverage, and might be the start of some exciting interdisciplinary work. But why is the FHI interested in looking for aliens?

The reason is that the question about extra-terrestrial life and intelligence has a great deal of bearing on our own future.

If the universe had been full of alien intelligences we would have been able to look at the skies and learn something about what was technologically possible, what risks there were, how long civilizations survived and what they developed into. Instead we see a great silence.

Maybe the explanation is that we simply have not looked hard enough or in the right places. But it is likely that whatever the answer to the Fermi question “where are they?” implies something strange and important:

If we are alone in the universe, we have a huge moral responsibility. We can spread and fill it with life and consciousness… or fail, leaving the universe empty and meaningless without observers.

Why we are alone also matters. If we are alone because life or intelligence is hugely unlikely, we are the lucky winners of a vast lottery – lucky, yet not special, since our existence as observers requires success at least somewhere. Otherwise we would not be around.

But if we are alone because intelligence easily goes extinct, then we are in danger. Whatever the danger is, we need to understand it and find a way of escaping it. Which, given the lack of aliens, may be very hard.

If there are aliens but they all for some reason behave in the same way – never leaving their planets, evolving to dense computational objects in the galactic halo, hiding from each other, or hiding themselves from us – then that is a strange and fascinating fact about the fate of civilizations. What cultural forces could be so strong that any species, no matter its origin and alienness, will follow the same trajectory? And is it a desirable one?

Maybe there are fundamental technological limits on what we and any aliens can do, forever keeping us apart. Again, understanding what those limits are would tell us important things about our own future.’’